Did you know that scouting doesn’t end with Cub Scouts? Once a scout reaches eleven years old or fifth grade, they can join a Scouts BSA Troop. The transition from a Pack to a Troop is celebrated in a Bridging Ceremony, so named because traditionally the scout walks across a bridge between the two units.

The Bridging Ceremony typically takes place in the early spring, and is a joint effort between the Pack and whichever Troops the scouts have chosen.

It is up to each scout and their family to choose which Troop they will bridge to, as different Troops have a different focus, preferences, and, of course, meeting location. Troops chosen by members of Pack 8 in the past include: Troop 8, Troop 201, Troop 350, Troop 94, and Troop 95.

In this picture, Den 4 (2014-2019) poses with their den leader before bridging to various Troops. 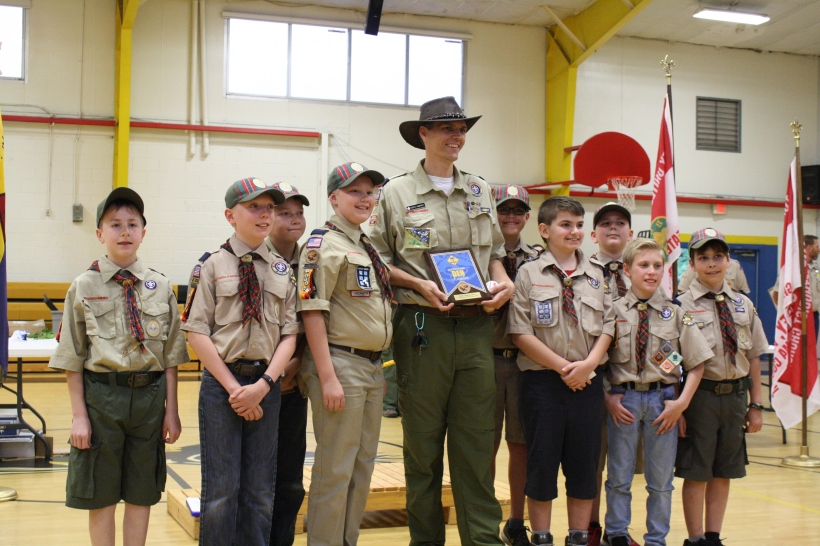 Kevin White joined Pack 8 with his Daughter in the fall of 2018. He started his leadership role as an Assistant Den Leader and now serves as Den Leader for Den 8 and as Assistant Cubmaster. His prior scouting experience was when he himself was a Cubscout around 1985. He has fond memories of these times and wants to share them with his two scouts. Liza, 8, will be a Bear this year (2020) and her sister Charlie, 5, will begin the program as a Lion. Kevin is specialist in mapping and geospatial information. His career has allowed his family to live in very interesting places including 5 years in interior Alaska. His favorite things about Cubscouts is that it shows kids that things don’t have to be on a screen to be fun and interesting and that it provides opportunities to do interesting activities as a family

When did you join Pack 8?
August 2019, when our oldest joined as a Tiger Cub.

What scouting experience did you have before volunteering?
I joined Boy Scouts in fifth grade and finished as an Eagle Scout with weeks to spare. Kia Kima Scout Reservation in Hardy, Arkansas was my favorite (summer) camp, where I really enjoyed the Challenging Outdoor Personal Experience (COPE) high ropes courses, canoeing the Spring River, and was the 1995 Freak (of Nature) of the Week. I’m an Ordeal member of the Order of the Arrow.

What is your current role with Pack 8?
Wolf Den Leader, and possible rotating Lion Den Leader.

How long have you had this role?
I’m new to the Wolves this year; I moved up with my Tiger. Helping with Lions is new this year (and could be dizzying).

What previous roles have you had and for how long?
I held several leadership positions in my scout troop, but Quartermaster was my favorite. I was briefly a Jr. Assistant Scoutmaster with my old troop before I started college and forgot when meetings were. After that, I took a brief 20-year hiatus before serving as Tiger Den Leader (2019-2020) for Pack 8. It was a fun, weird year.

How many Cub Scouts are you raising?
Two (a Wolf and a Lion). They are getting heavy, so I should set them down somewhere.

Something interesting about you?
I was mistaken as an Elvis impersonator once, and it earned me a free lunch. If you don’t know who Elvis is, ask your parents (or grandparents).

I am an Eagle Scout, like my father before me.

Favorite part of being in Pack 8?
Post-meeting snacks. After that, it’s helping kids to learn and live the Scout Law.

I have a malformed seriousness gland, and I can provide a doctor’s note if needed.
Lee Allen
King of the Impossible 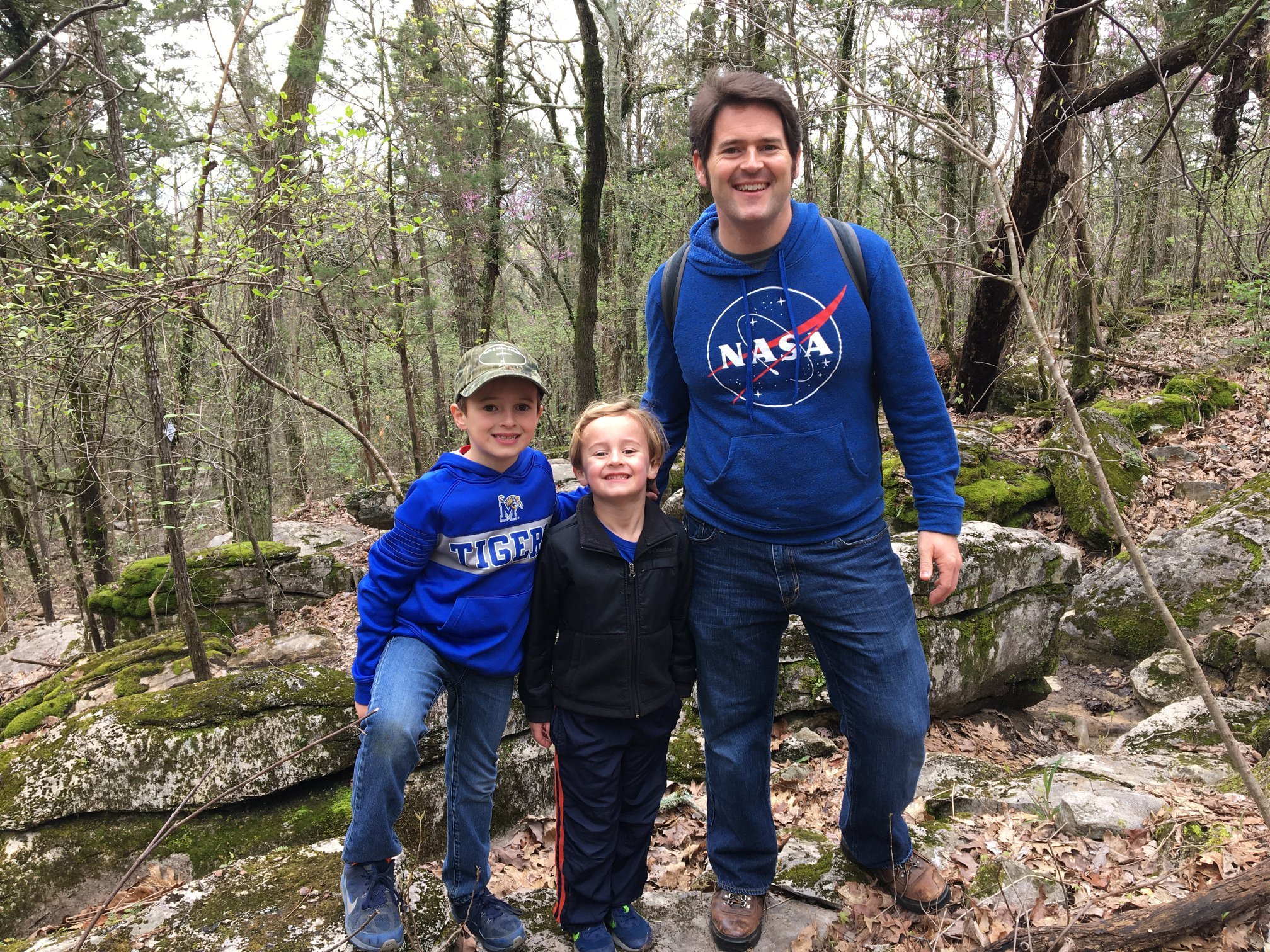 Our annual race took place on March 7, 2020, less than a week before everything shut down due to COVID-19. Congratulations to the winners! 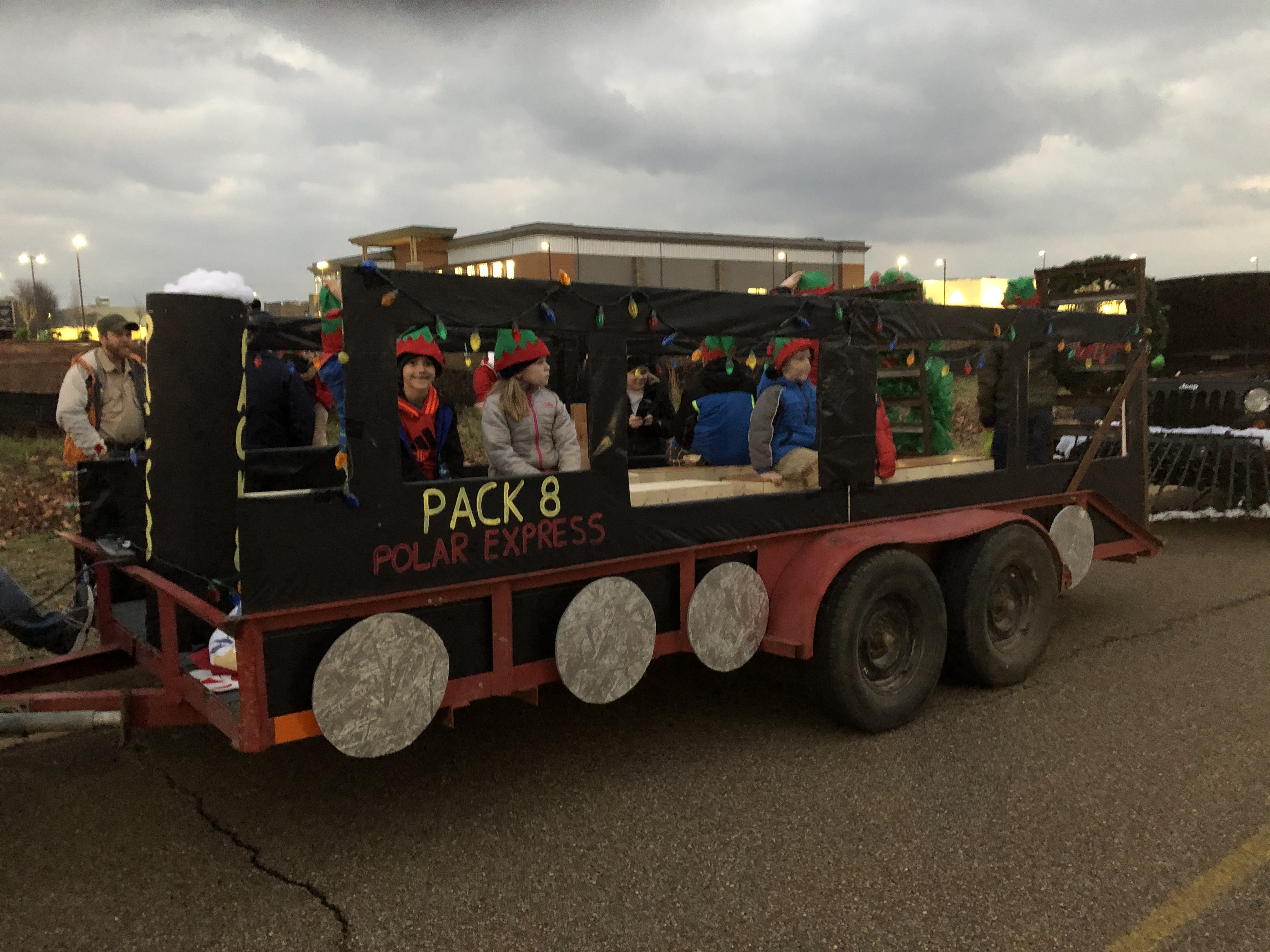 Pack 8 had a warm, fun filled, and educational weekend during the recent Fall Cookout and Camping trip. It took place the weekend of September 7th – 9th, 2018 at Monte Sano State Park in Huntsville, Alabama. The Monte Sano State Park is a jewel of nature that’s just outside of the city. At an elevation of 1,621′, it is nestled atop Monte Sano Mountain northeast of town. The park features 20 miles of hiking trails that often lead hikers to stunning overlooks of the city and the surrounding foothills of the Appalachian Mountain Range. Throughout the weekend the scouts were challenged both physically and mentally, and through fellowship, teamwork and friendly competition they learned lessons that will serve them well in the future.

The fun began for many on Friday night with camping, grilling, s’mores and fireside fun. The Friday night camping was optional, and since Pack 8 had reserved the site for the whole weekend, those who came early got a bonus night!

Saturday was when the main festivities began. At 11:30 am the Pack joined at the main pavilion to hold the annual fall cookout. Pack 8 provided hamburgers and hot dogs and the scouts were asked to bring sides. Once it was all assembled, a feast that would rival many family reunions was had by all. While eating we were made aware by some very observant scouts that we were sharing the space with several bats who were trying to rest peacefully in the rafters above our tables. Needless to say, this was quite exciting! After a bit, everyone calmed down and continued to socialize with both new and old members of the pack. Once everyone had finished the feast, it was time to hold the Annual Raingutter Regatta! 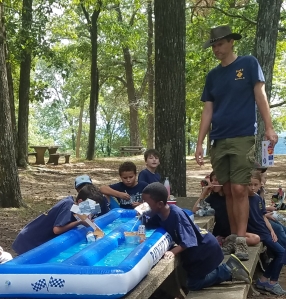 For the Raingutter Regatta, the scouts were tasked with constructing a watercraft out of household recyclables to be raced against other scouts down an inflatable “raingutter” track. The rules were simple: the craft had to be constructed with a sail and blown down the track by blowing into the sail through a straw. The range of ingenious designs constructed by the scouts was amazing as was the range in performance of the crafts. Many of the group learned important lessons in physics due to their boat either flipping over or zipping through the water to the end of the track.

During the race, the Cubmaster officiated the competition and a Den Leader made the calls for who won each round. The scouts all cheered for their den mates, and all of them got to participate in multiple heats. At the end, the grand champion boat was named winner for the year, and everyone pitched in to clean up and “leave no trace” in our picnic and competition area. Following the Raingutter Regatta, it was time to take a hike!

The trailhead was situated near the picnic site so after the site was cleaned up, the pack headed straight to the hike. At the beginning of the trail the cubmaster explained to the pack the importance of having a trail buddy, and how they should always stay with and look out for their partner. After this, we headed into nature. A short walk down the trail brought us to a fork in the trail. The Webelos took the right fork, an approximately five mile round trip to a bluff with a great view and back, and the younger cubs took the left fork which led them about a mile through the woods back to the campsite. During the hike adults were heard teaching the the younger scouts about trail blazes and everyone enjoyed the walk through nature’s beauty.

Following the hike, the pack then retired to the campsite to cook dinner and make any preparations to their campsites prior to dark. Around 7:30 that evening, there was an option to attend a talk and demonstration at the nearby Wernher von Braun Planetarium. Many scouts attended, and listened to a lecture that discussed the two largest asteroids in our solar system. The speaker showed pictures of large impact craters and the sizes of the rocks that made them. It was very interesting to learn how a collision with a relatively small space rock could cause huge amounts of damage to Earth. Following this discussion, another speaker displayed the visible planets and constellations that could be currently seen in the sky on the dome of the planetarium. Finally, a lucky sky weather night allowed the group to view stars and planets through high powered telescopes that were operated by volunteers outside of the facility.

After the visit to the planetarium, the pack returned to camp. Many were wiped out from such a long and exciting day, but several could not resist the allure of roasted marshmallows, s’mores and a campfire. The scouts and their families hung out and socialized for a bit longer. Once it was time to call it a night, the fire was extinguished and everyone bedded down for the evening.

The next morning, the pack’s leadership prepared pancakes, sausage and bacon for breakfast. There was rain the forecast, but it was for later in the morning. Everyone ate breakfast and packed up their gear. As we left the park, it began to sprinkle. Perfect timing, and the perfect end to a fantastic scouting weekend.

The current Den 8 is our first all-girl den! Due to BSA regulations, all dens must be single-gender. This Den formed in Fall 2018 as a multi-rank den, with members working on age-appropriate requirements from Tiger through Arrow of Light. This den currently has 3 scouts led by Kevin White and Kayla Walsh.

In Spring 2019 this den’s first Arrow of Light scout bridged to Troop 95.

Congratulations to our 2018 winners!! All of these are eligible to participate at the Talakto District Pinewood Derby on March 10, 2018. The top three Scouts in Speed and Looks will receive trophies at our Blue & Gold Banquet on March 3, 2018. 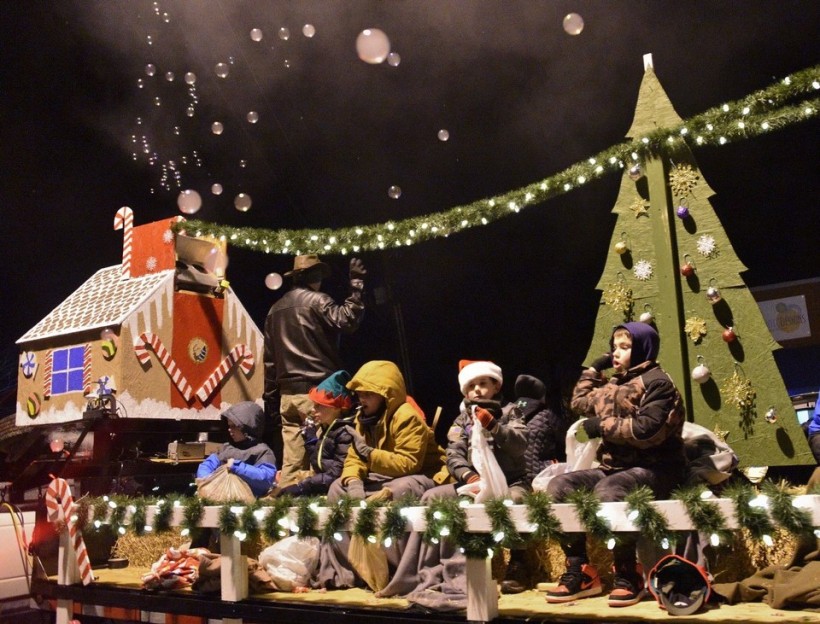 The theme for this year’s Madison Christmas Parade was “The Sights and Sounds of Christmas”. Of course our chimney again played a prominent role in the design, flanked by two artificial trees. The big additions this year were a giant plywood tree, complete with decorations, and a detailed, hand-painted gingerbread house. Coming from the chimney of the gingerbread house floated bubbles filled with smoke – our interpretation of snow. Elf hats were available for the boys, but the night was so bitterly cold that most opted to wear a beanie.

For the 4th year running we were pleased to receive the Mayor’s Large Float Award. 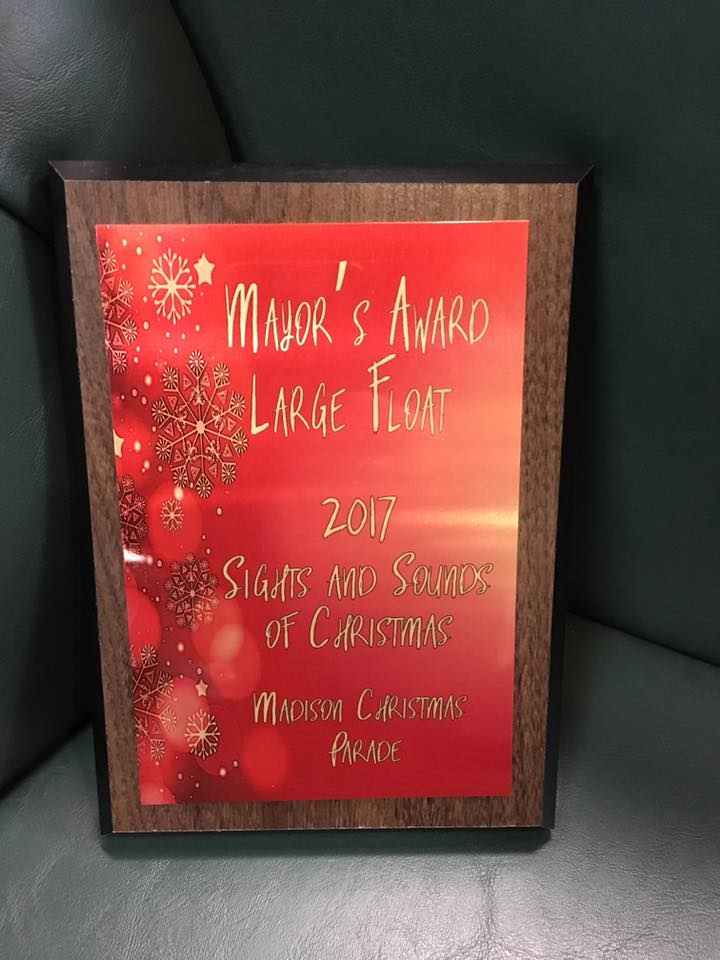 Jennifer White joined the Pack 8 leadership as Committee Secretary in 2017. If you know her, remind her to send her bio and a picture to the webmaster…